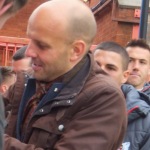 Paul Tisdale came to Exeter City on loan in December 1997 from Bristol City, and scored on his debut.

He returned as manager of Exeter City in June 2006, and played one more game at the end of the 2010/11 season coming on as a substitute in a game against Sheffield Wednesday.